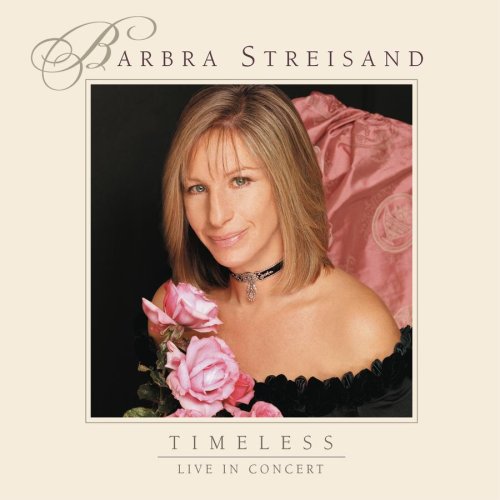 Barbra Streisand’s Timeless: Live from the MGM Grand is not merely a career retrospective–it’s a life retrospective, and a show rather than a concert. The opening scene is 1955, with a young singer (ably played by Lauren Frost) finding her voice. As she wistfully begins “Something’s Coming,” the grown-up Streisand joins in to an electrifying ovation and proceeds to take us on a journey through her life: the torchy period (“A Sleepin’ Bee”), the Broadway period (“Don’t Rain on My Parade”), the movie period (“Evergreen”), the Sondheim period (“Putting It Together”), and the James Brolin period (“I’ve Dreamed of You”). She also recalls through video clips several duets before she sings “I’ve Got a Crush on You” with a clip of Frank Sinatra, and debuts a new song by Marvin Hamlisch and Alan and Marilyn Bergman, “Simple Pleasures,” then counts us down to the new year (or new millennium, depending on your math).

It’s titled Timeless, but this long-awaited double CD is already somewhat dated, having been recorded in Las Vegas on December 31, 1999, and January 1, 2000, but not released until September 2000, by which time the Y2K jokes are already quaint. Also, the extensive monologues and acted-out sequences might wear a bit upon repeated listenings. But when you hear such familiar fare as “Something Wonderful” and “Alfie” and immediately forget anyone else who has ever sung them, you’ll realize that it’s the singer and her signature songs that are indeed timeless. If Streisand has in fact decided to stop performing live, then at least we have this document to remind us of how great a treasure she is. –David Horiuchi