“Cry Me A River” Available on All DSPs Today Listen HERE 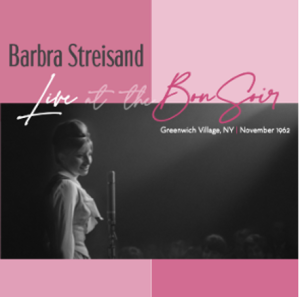 September 23, 2022-New York, NY-Columbia Records and Legacy Recordings, a division of Sony Music Entertainment, are pleased to announce the digital and CD release of the long-awaited Barbra Streisand – Live At The Bon Soir on Friday, November 4.

Available digitally or on CD, Live At The Bon Soir may be pre-ordered HERE

Fans can get a first taste of Live At The Bon Soir and Barbra’s show-stopping rendition of “Cry Me A River,” which is available now through all DSPs. Listen

Impex Records is honored to present 180-gram 2LP and SACD of this unreleased classic from the world’s pre-eminent vocal artist and have given these their usual “Impex Treatment” with meticulous attention paid to every aspect of audio and package presentation: SACD is contained in a lavish hardcover book package with a 32-page booklet full of historical notes, photographs and a message from Barbra Streisand. The 2-LP HQ-180 vinyl set gets a tip-on gatefold jacket and a similarly-featured 12-page booklet. Pre-Order yours today: HERE

With new mixes supervised by Barbra and Grammy Award-winning engineer Jochem van der Saag, listeners are able to experience what it was like to witness 20-year old Streisand at the dawn of her unparalleled career. Recorded in a tiny Greenwich Village nightclub on November 4, 5 and 6, 1962 (just weeks after Streisand inked her first record deal with Columbia on October 1), Live At The Bon Soir was originally intended to be Barbra’s debut album for the label.

The tapes for Live At The Bon Soir were eventually shelved in favor of 1963’s The Barbra Streisand Album (which offered studio versions of 11 songs from Barbra’s nightclub repertoire).  That groundbreaking album  took home several Grammys including Album of the Year and Best Female Vocal Performance.

With the release of Barbra Streisand – Live At The Bon Soir, her first album since 2021’s Release Me 2 (a career-spanning compilation of rare and previously unreleased recordings), Columbia Records celebrates Barbra Streisand’s 60th anniversary with the label. She is the only artist–solo or group–to have charted #1 albums across six consecutive decades (60s, 70s, 80s, 90s, 2000s, 2010s).

2022 marks the 60th anniversary of her legendary appearances at the famed Greenwich Village haunt, The Bon Soir.  For the first time, Barbra Streisand – Live At The Bon Soir includes 24 tracks that have been produced, mixed and approved by Barbra Streisand and released in their entirety as an album. All of the original master tapes are from Barbra’s personal vault.

Barbra Streisand – Live At The Bon Soir was produced by Barbra Streisand, Martin Erlichman and Jay Landers. In Landers extensive liner notes (which also include song-by-song descriptions of the album’s 24 tracks), he remarks, “The science of recording has made quantum leaps since 1962. Grammy Award-winning engineer, Jochem van der Saag, has subtly solved audio issues in ways his predecessors could hardly have fathomed. Absolutely nothing about Barbra’s sterling vocals has been altered. However, the overall sonic picture has been greatly improved from the original tapes.” According to van der Saag, ‘The moment we played the tapes through modern state-of-the-art speakers, it was clear what the original engineers, Roy Halee and Ad “Pappy” Theroux, had faced. The club’s acoustics were obviously not designed for recording, and there was a lot of leakage from the instruments into her vocal mic. If we wanted to lower the volume of the piano for example, the vocal volume would decrease, too. To give listeners ‘the best seat in the house,’ we used cutting-edge spectral editing technology, clarifying the true artistry of Barbra and her band.'” Barbra was accompanied by a first-rate quartet of veteran musicians: Tiger Haynes on guitar, Averill Pollard on bass, John Cresci on drums and Peter Daniels on piano. It was evident that she and the band shared a genuine camaraderie and mutual admiration.

As Barbra says in her personal liner note, “I had never even been in a nightclub until I sang in one. I sang two songs in a talent contest at a little club called The Lion and won, which led to being hired at a more sophisticated supper club around the corner called the Bon Soir, with an actual stage and a spotlight. The buzz that began at the Bon Soir led to a contract with Columbia Records in 1962, the start of a long association that continues to this day. The initial plan for my first album was to record it at the club, and these early tapes have been sleeping in my vault for six decades. I’m delighted to finally bring them out into the light and share what could have been my debut album, Live At The Bon Soir.”