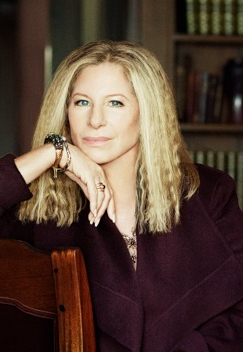 “Hearing that Barbra had agreed to accept the Sherry Lansing Leadership Award was both humbling and exhilarating. Barbra’s remarkable professional achievements and philanthropic generosity have greatly inspired me and hundreds of millions of people worldwide,” said Sherry Lansing, former CEO of Paramount Pictures, and the first woman to head a Hollywood studio. “The Hollywood Reporter could not have chosen a more deserving individual to recognize than Barbra.”

As a recipient of The Hollywood Reporter’s Sherry Lansing Leadership Award —which recognizes a woman who is a pioneer and a leader in her industry—Streisand joins a long line of preeminent names including last year’s Shonda Rhimes, as well as Oprah Winfrey, Diane Keaton, Jane Fonda, Dame Helen Mirren, Meryl Streep, Halle Berry, Jodie Foster, Glenn Close and Barbara Walters.

“Barbra Streisand perfectly exemplifies the ideals and mission of the Women in Entertainment initiative,” said Janice Min, co-president and chief creative officer of Guggenheim Media’s Entertainment Group. “She’s a once-in-a-generation talent who continues to transcend boundaries and pave the way for women in entertainment, philanthropy and politics. It’s an honor to have her carry this torch.”

This winner of two Academy Awards, 10 Grammy Awards including Grammy’s Lifetime Achievement and Legend Awards and five Emmy Awards, is the only artist ever to receive Oscar, Tony, Emmy, Grammy, Directors Guild of America, Golden Globe (11,) National Medal of Arts and Peabody (4) awards and France’s Légion d’Honneur as well as the American Film Institute’s Lifetime Achievement Award. The three films she directed earned a total 14 Academy Award nominations. Barbra Streisand is one of the most accomplished figures in Hollywood history.

Streisand has dominated the entertainment industry in all facets, including as a singer, actress, director composer, screenwriter and producer. In music, she is the only recording artist to have achieved #1 albums in six consecutive decades, a span of nearly 50 years between the first and most recent, 10 #1 albums in all.. As determined by the Recording Industry Association of America, with 52 Gold albums, 31 Platinum and 13 Multi-Platinum, Ms. Streisand is the best-selling female recording artist in history. She is the only woman to make the All-Time Top 10 Best Selling Artists list. Her total of 33 Top 10 charting albums ties her with Frank Sinatra for second place in that significant category, with only the Rolling Stones ahead of them. She became the first female composer ever to win an Academy Award when she received an Oscar for her song, “Evergreen,” the love theme from her 1976 hit film, “A Star Is Born.” It is one of two nominations as a composer.

Her chart topping records, performances in classic films such as “Funny Girl” (for which she earned the Best Actress Oscar,) “The Way We Were,” also a Best Actress nomination,, ‘A Star Is Born,” “Prince of Tides” and “Yentl,” the latter two of which she directed, and her accomplishment with “Yentl” of being the only female artist to direct, write, produce and star in a single major studio film are today touchstones of contemporary culture.

Like the true Renaissance woman Barbra Streisand is, her life and her art are dedicated to the humanities as reflected by The Streisand Foundation, which is committed to gaining women’s equality, the protection of both human rights and civil rights, the needs of children at risk in society, women’s health and the preservation of the environment. Her substantial charitable contributions include donating and raising other significant gifts to fund the Barbra Streisand Women’s Heart Center at Cedars-Sinai Medical Center. Most recently, Ms. Streisand co-founded a national non-profit called the Women’s Heart Alliance to raise awareness, encourage action and drive new research to fight women’s heart disease, the number one killer of women in the United States.