Proof That Women Are the Better Dealmakers in the Senate 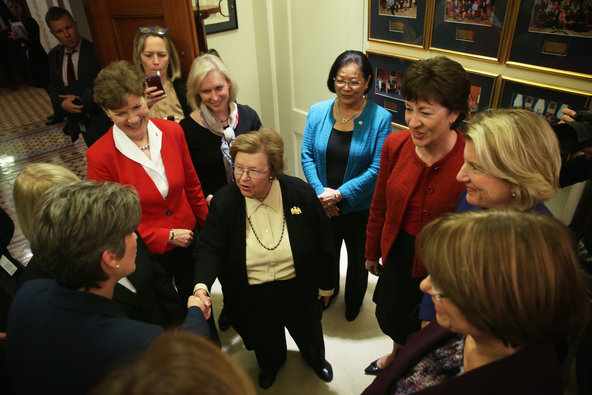 A couple of enterprising Harvard University students have uncovered proof of what women in the United States Senate have long suspected and claimed: They really are better than men at working together, passing bills and cutting bipartisan deals.

Inspired by a recent article in The New York Times about women in the Senate, Quorum, an Internet start-up founded by two Harvard seniors that analyzes legislative data for corporate clients, put its number-crunchers to work. It’s a little bit wonky, but stick with it. Over the past seven years, the Quorum analysis found, the average female senator co-sponsored 6.29 bills with another Senate woman, while the average male senator co-sponsored 4.07 bills with another Senate man.

Over all, women were far more likely than men to work across the aisle. Quorum found the average female senator co-sponsored 171.08 bills with a member of the opposite party; for the average male senator, that figure was 129.87.

“Women are not only introducing more legislation over the last seven years, but they are also getting more support for that legislation, getting more bills out of committee and getting more enacted than their male colleagues in the U.S. Senate,” said Quorum’s co-founder, Alex Wirth, a former White House intern and one-time Senate page who comes by his interest in politics naturally. (Timothy Wirth, the former Democratic senator from Colorado, is his great-uncle, and his parents met on a Wirth Senate campaign.)

Quorum draws data from publicly available information, including congressional bills, votes, news releases, tweets and floor statements. The numbers, of course, do not explain why female senators appear more collegial and productive, though Mr. Wirth notes that the women of the Senate have long held their own bipartisan dinners, which could have something to do with it.

That’s a good bet. Quorum found the female effect was not as strong in the House.