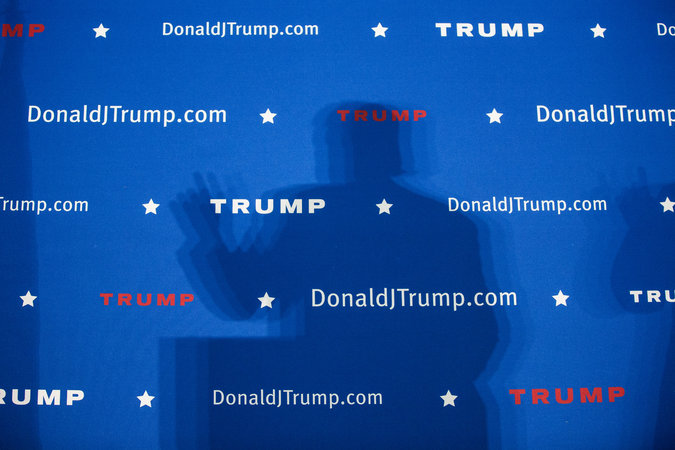 The  betting markets now say that the most likely Republican nominee for president is a man who mocks women, insults Latinos, endorses war crimes like torture, denounces party icons and favors barring people from the United States based on their religion.

He’s less a true-believer conservative than an opportunist, though, for he has supported single-payer health insurance, abortion rights and tighter gun measures. Lindsey Graham says he’s “crazy,” Jeb Bush says he would be worse than President Obama, and the conservative National Review warned that he is a “menace to American conservatism.”

It’s Donald Trump, of course. He’s smarter than critics believe — he understood the political mood better than we pundits did — but I can’t think of any national politician I’ve met over the decades who was so ill informed on the issues, or so evasive, or who so elegantly and dangerously melded bombast and vapidity.

So how did we get to this stage where the leading Republican candidate is loathed by the Republican establishment?

In part, I think, Republican leaders brought this on themselves. Over the decades they pried open a Pandora’s box, a toxic politics of fear and resentment, sometimes brewed with a tinge of racial animus, and they could never satisfy the unrealistic expectations that they nurtured among supporters.

Perhaps it started in 1968 with Nixon’s “Southern strategy,” recruiting white segregationists infuriated by the civil rights movement. It then expanded to encompass immigration and the three G’s — God, guns and gays.

Of course, Democrats also sometimes campaigned outrageously, and some Republicans scorned the politics of hate. There was a marvelous scene in 2008 when John McCain was running against Obama, and a woman at a McCain rally suggested that Obama was an Arab who couldn’t be trusted. McCain corrected her and then praised his rival: “No, ma’am. He’s a decent family man, a citizen, that I just happen to have disagreements with on fundamental issues.”

Political nastiness and conspiracy theories were amplified by right-wing talk radio, television and websites — and, yes, there are left-wing versions as well, but they are much less influential. Democrats often felt disadvantaged by the rise of Rush Limbaugh and Fox News, but in retrospect Limbaugh and Fox created a conservative echo chamber that hurt the Republican Party by tugging it to the right and sometimes breeding a myopic extremism in which reality is irrelevant.

The Republican establishment profited from the insinuations that Obama is a Muslim, that he’s anti-American, that his health care plan would lead to “death panels.” Rick Perry has described Trump as a “cancer on conservatism” and said his movement is “a toxic mix of demagoguery and meanspiritedness and nonsense that will lead the Republican Party to perdition” — indeed, but it was a mix that too many Republican leaders accepted as long as it worked for them.

This echo chamber deluded its believers to the point that it sometimes apparently killed them. During the 2009-10 flu pandemic, right-wing broadcasters like Limbaugh and Glenn Beck denounced the call for flu shots, apparently seeing it as a nefarious Obama plot.

The upshot was that Democrats were 50 percent more likely than Republicans to say that they would get flu shots, according to a peer-reviewed article in The Journal of Health Politics, Policy and Law. So when the pandemic killed up to 18,000 Americans, they presumably were disproportionately conservatives.

The Republican strategy also nurtured expectations at the grass roots that could never be met. “The Republican Party created Donald Trump,” said Erick Erickson, the conservative radio host, “because they made a lot of promises to their base and never kept them.”

This is a theme of a smart new book by E.J. Dionne Jr., “Why the Right Went Wrong,” who argues that Republican leaders repeatedly made unrealistic pledges — of smaller government, preservation of bygone values and an end to demographic change. “The history of contemporary American conservatism is a story of disappointment and betrayal,” he writes, and that helps explain the disenchantment with the Republican establishment.

Maybe Trump’s campaign will fall apart, but he has a huge lead in the polls in the South Carolina primary coming up, and he has already done enormous damage to the G.O.P. establishment.

So today the leading candidate for president in the party of Lincoln is an ill-informed, inexperienced, bigoted, sexist xenophobe. And he’s not a conservative at heart, just a pandering opportunist.

Donald Trump is the consequence of irresponsible politicking by Republican leaders, the culmination of decades of cultivating unrealistic expectations within the politics of resentment. It’s good to see leading Republicans standing up to him today, but the situation recalls the Chinese saying, qi hu nan xia — when you’re riding a tiger, the hard part is getting off.