*Note: This isn’t verified as of yet. 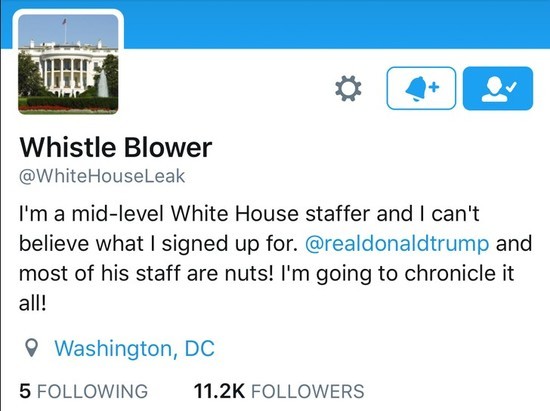 On Wednesday, a twitter account was briefly active before being shut down. The tweeter, @WhiteHouseLeak, is an anonymous mid-level staffer in the West Wing of the White House, who described a chaotic atmosphere, a demoralized staff, and an unfocused and irrational President incapable of processing information. The staffer is a Republican who apparently worked on the Trump campaign, but is now thoroughly disillusioned by what has been going on.  During his brief presence he was tweeting to real reporters, including Fox News and the New York Daily News.

It is impossible to know if the leaker shuttered the account himself or was outed. The tweets have all been deleted, but thanks to screencaps by MC Rantz Hoseley (@MysteryCr8tve) and an imgur by vapensiero they were preserved before vanishing. The presentation here is, I believe, in strict chronological order. I have omitted a few irrelevancies, but most of the 37 total tweets from the account are shown below.

The thread referred to here, from NYT reporter Maggie Haberman, is very likely the one I will recap below.

The Maggie Haberman thread, which @WhiteHouseLeak described as “correct” and “completely solid” is below:

Portrait of a man on the edge. Of what, we do not yet know.